Are you interested in U.S. coins, World coins or paper money? 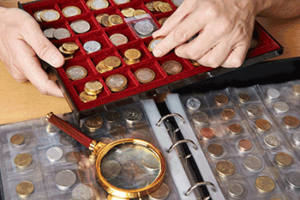 In the thirty seven years Herb’s Coins has been in business we have bought and sold coins and currency from around the world. Our inventory consists mainly of United States coins and currency. A smaller section of the inventory is from foreign city states, provinces and countries: some of which do not exist today. The third area of inventory is medals and tokens (Civil War, Hard Times, and Merchant). We have sold US coins dating to 1792, the year the US Mint was established and also coins from Colonial America (New Jersey , Connecticut, Massachusetts and New York Coppers). We have also bought and sold US Colonial paper money, some of which were designed and signed by Benjamin Franklin and other great American patriots. We would very much like you to visit our e-store on eBay at herbscoinshop or our retail store at 2348 Harbor Blvd in Port Charlotte, Florida 33952. Below is a small sampling of the coins and currency we buy and sell along with a few fun facts:

Often referred to as pennies (a throwback to our British heritage), cents were minted continuously from 1793 to the present day with the exception of 1815. The Mint was out of copper planchets for that year. Many of the early Large Cents (larger than a quarter and about twice as thick) are very rare and expensive. Small cents were introduced to the public in 1857. They are about the same size as today’s cents but a little thicker. In 1859 the Indian Cent was introduced and in 1909 the Lincoln Cent was introduced. The Indian and Lincoln Cents are widely collected by coin hobbyists. Many of today’s serious collectors started out with “penny” boards. We have a wide selection of cents on hand, from the least expensive to some of the more expensive ones.

Visit our eBay store to browse and purchase the following cent categories:

Half Dimes and Dimes

Half dimes and dimes first started out as half dismes and dismes, a Latin word decimus or 1/10. They were some of the first coins to be minted. Many of the early dimes are very expensive. Along with other denominations, half dimes and dimes have had many different designs. Half Dimes were minted from 1794 to 1873 when the Nickel 5¢ became well established. Dimes were minted from 1796 to present with some breaks in continuity. Most novices to intermediate collectors collect Mercury and Roosevelt dimes (1916 to present).

Half dollars were first minted in 1794 and are still being minted today. As with the quarters, there are many years when no half dollar was minted. Most collectors today collect Walking Liberty, Franklin or Kennedy Half Dollars. Serious collectors look for the Flowing Hair, Bust, Seated or Barber Half Dollars.

The silver dollar is one of the most collected coins in US history. Minted from 1794 to 1935: they consisted of roughly 90% silver and 10% copper. The Morgan Dollar, minted from 1878 to 1904 and 1921, is in great demand. There is a group, Society of Silver Dollar Collectors or SSDC that collects and studies the Morgan dollar to great extent looking for old and new varieties. Some of the Morgan dollars are expensive on their own due to low mintage or condition, but some varieties are equally expensive. In 1971 the US Mint started producing dollars again, only there is no silver in them (with the exception of several ‘collector’ coins minted from 1971 to 1976).

Other Denominations of U.S. Coins

Although Herb’s Coins deals mainly in US coins and currency, we do have a small but impressive selection of foreign coins and currency. Prices range from .50 to hundreds of dollars and from many different countries, from all continents except Antarctica.

If you have any rare or not so rare coins or currency (US or foreign) that you wish to sell, please come in and see us or call 941-629-5777 or by mail or e-mail. If you are looking to buy please visit us on eBay at herbscoinshop or at our retail store at 2348 Harbor Blvd, Port Charlotte, Florida 33952. We carry a good line of bullion material. We also do free appraisals!